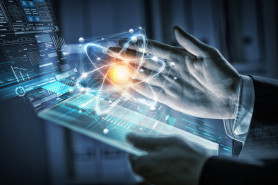 WHAT IS REC?
Plans to create a network of 15 world-class scientific and educational centers are defined by Decree of the President of Russia Vladimir Putin dated May 7, 2018 No. 204 "On national goals and strategic objectives of the development of the Russian Federation for the period up to 2024".

According to the goals of the national project "Science and Universities", in 2024 Russia should enter the top ten countries in the world in terms of research and development, including through the creation of an effective system of higher education.

The purpose of the REC is to build a modern model of research and development based on scientific, educational and industrial cooperation in the chain "science-universities-business", contributing to the socio-economic development of the territories of the subjects of the Russian Federation. RECs are designed to integrate all levels of education, the capabilities of scientific organizations and businesses for powerful technological development and ensuring technological sovereignty.

The basis of the REC's activity is the implementation of a portfolio of technological projects focused on the implementation of world-class research and development, obtaining new competitive technologies and products, and their commercialization. Integration mechanisms of RECs due to the concentration of intellectual, human, material and other resources will allow for advanced training in the interests of various sectors of the economy and the economies of the constituent entities of the Russian Federation, develop breakthrough research areas, create high-tech production based on Russian developments, as well as form competitive teams of researchers and developers who are able to "grow" a new generation of researchers for the future.

By 2022, 15 RECs have been created, whose activity programs are being implemented in 36 subjects of the Russian Federation.

HOW CAN THE PROJECT OFFICE HELP?
The project office provides consulting and methodological support to the initiators of the creation and participants of the REC on the preparation of applications for participation in the competitive selection, the implementation of REC activity programs, conducts an examination of REC activity programs and documents within the framework of the competitive selection, reviews annual reports on the results of activities.

Have a question about REC? Write